Skip to content
Bryan Tookey starts us off with a great story of his disheartenment at having food poisoning in Morocco, rather than his dream post university Overseas Experience. A nice icebreaker. But he then dives into some median data of the Top 100 brands in UK and US on Facebook and Twitter. Starting with Twitter here’s some highlights – Tweeting 8 times per day was the median for brands.
Having removed the outliers that use twitter for customer service of which Xbox, BT O2 and orange lead. – On average, tweet volume has decreased from 2011 to 2012. – Last year very few responded to @messages and even less responded to negative brand mentions. The data not conclusive as to if responding is good… – Compared to last year, brands are creating multiple accounts.
Which seems contrary to the practice of social media old hats like Dell who are consolidating from hundreds back to tens of accounts. – There also seems to be a long tail of brands with thousands of mentions a day, but most sitting down in the 0 to 50 mentions per day. – Average time to respond was 3hours 37minutes. Which was interesting compared to social bakers data yesterday, saying that the average response time on Facebook was 28 hrs. Different data sets, but an interesting comparison. And a final note, when thinking “hey do I need a fancy tool like Buddymedia or Vitrue (both recently acquired)? It seems that most are still less sophisticated. Using Hootsuite or the web interface, to post their tweets. And, Sorry, I’m not big on Facebook so here’s a quick summary: 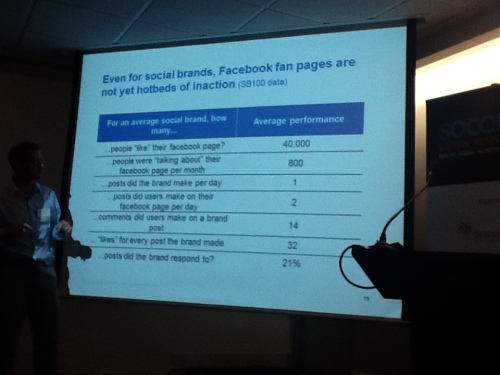 Of note though – unsurprisingly smaller businesses are beating the man in terms of responding and engaging with their fans.

From the QA session: – The feeling is that ease of use, is what is keeping people using the web interface or Hootsuite.
– Number of Likes has been ousted by Shares as the new simple measure of success on Facebook
– In a show of hands, for usage of networks: Google plus ranked last to the top three( Twitter, Facebook, Linkedin), but still ahead of Pinterest (for now, I say). Can’t wait for the slideshare links.