Han Han is a self-proclaimed “ordinary” blogger, but the hype and numbers tell us something entirely different; at little over 30 he was voted the second most influential person by Time magazine in 2010.

The truth is that the double-barrelled, hard-hitting Chinese blogger is probably the most popular blogger in the world. Ordinary, he is not. The numbers are staggering.

With over 500,000,000 hits to his blog and an average of one million reads for each post, he’s renowned for attacking (which he plays down) the local government and commenting on state funded movies that fail. A modern-day Robin Hood? Possibly, a rebel/player/geek? Definitely. 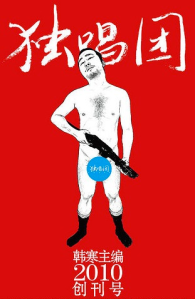 Han Han is also a best selling author and pro-race car driver and his magazine Party (cover left) sold a million issues before being censored and shut down. Although a super blogger he’s not a big fan of Sina Weibo (China’s version of Twitter). He thinks he’ll get too distracted looking at sexy profile pics rather than reading tweets.

Having already set your view of Han Han as a partying Fast and Furious extra – why am I interested and why should you be? Well his success as a blogger is down to a formula that translates to any language.

Here are ten reasons why Han Han thinks he has something over his blogging competitors:

1. Practice – slightly arrogant perhaps, but he believes he writes better than others, and as we all know the secret there is practice.

2. Be amusing – Han Han says humour is a great way to separate himself from other bloggers.

3. Write simply – if you’ve got something to say don’t wrap it in acronyms, waffle or hyperbole hard to read/understand words.

4. Appeal to your audience – he takes what’s happening around him and turns his observations in to speak his community understands.

5. Take time to post – just because it seems instant to get out a tweet, status update or blog post, doesn’t mean you should forget to research your article and switch on spell check.

6. Cover what’s hot – and don’t just photocopy what you are seeing. Give your users some perspective and explain why they should care.

7. Remember what happens in Vegas stays online – Han points out that the freedom social media and blogging give him to get things out means censors can’t remove it as it’s already reposted, shared etc. He also says it means there’s no editorial team there changing the meaning. But he does have to keep an extra eye on proof.

9. Know your limits – if you’re throwing down something controversial or contrarian be prepared to back it up. And if its really controversial, understand the repercussions. “I thought i’d have been questioned by officials by now,” Han Han told News Asia.

10. Be Cocky (confident) – Han turned down an interview with Barak Obama because it meant he would have had to get up early before his Race that day. A few lessons to take form that is: by appealing to a new audience, Han could have alienated his loyal fans – so don’t switch your focus just to meet a new niche. Stay consistent. Secondly, by being slightly aloof, Han Han has increased the hype surrounding himself even more.

This interview with News Asia highlights perhaps why Fast Company placed him as the 25th most creative person in business globally, up there with Oprah, Yuri Milner and Scott Forstall in 2012.

What else did you guys get from Han Han?